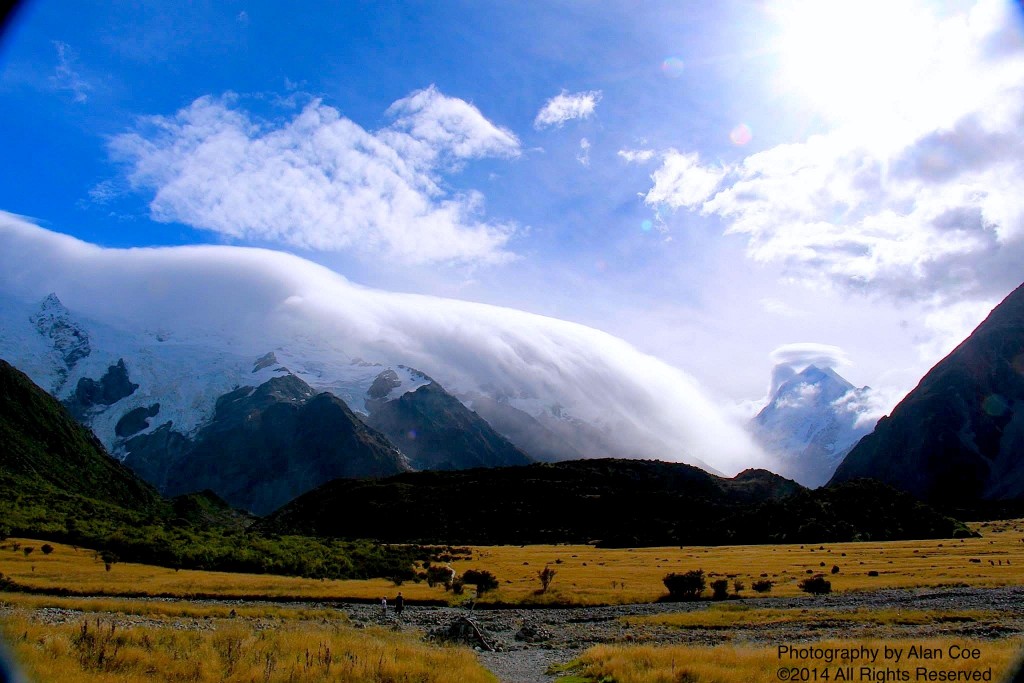 “You don’t have to be a fantastic hero to do certain things, to compete. You can be just an ordinary chap, sufficiently motivated to reach challenging goals.” – Sir Edmund Hillary

The pilgrimage started here, two days and ten years ago. We continued here, yesterday, when I’d grown up a little. We finish here, today. I don’t know when I’ll next be at Mt Cook and I’m excited to think what may have happened by then – going from history, something will have…

I missed Bella the van when I got to Queenstown, however hard it had been to get rid of her. I also missed Partner-in-crime – we were parted for a couple of months while I tried to sell Bella on the Gold Coast. Cai went to work in Adelaide and I went to stay with our pal, the late and loved Kade, and his family, after an abortive attempt to live alone in Bella, in Byron Bay and off bread & butter (alliteration unintentional). I wasn’t sure when or even if we’d be together again.

But we were 😀 Cai’d been in Auckland for the world cup semis, because Wales were doing so well (we’d even been in the same bar the same night without knowing it), but had never been further south than Auckland. So when he came to join me, I gleefully hired a wee camper van and picked him up from Christchurch. First stop – the hot pools of Hamner Springs. Second? Mt Cook.

We walked to Kea Point and stared at… well, where the peak should be. We were shrouded in mist, the mountain in cloud. You couldn’t see the landscape but I knew it was there. Remote and overwhelming, the sheer magnitude of the place surrounded us. “This…” I said, “This is New Zealand.”

That was winter 2012. Come summer, we had a place of our own and were road tripping every weekend, exploring, fishing, loving life. We went back to Mt Cook. This time we had bluebird skies. Only a year before, I hadn’t known where I was going – this time, I’d arrived.

Last weekend, Easter 2014, our good friend came over from Sydney. The last time we saw him in New Zealand, we’d road tripped to Ohau with Kade & co. Since then, so much has happened. We lost lovely Kade, one of the wonderful ones who, along with his whole family and girlfriend, wrote us letters to help us gain the passport stamps declaring us NZ residents that arrived last week. I’ve moved house, written a book and planned a trip back to the UK to visit. It’s been a crazy few months.

It was so good to be together again. We reunited in the pouring rain, but it cleared the next day and the cloud slowly swirled around Mt Cook like a halo as we trekked to Kea Point. The sun even popped out, warming our backs and lighting up the glaciers. We played peekaboo with Coe’s new camera (which brought us the above view) and yarned while we tramped about. Perhaps it’s not just been Mt Cook, but the company I’ve had on every visit there that has made it such a special place in my mind.

I’ve been awed by nature so many times now in that national park – and I’m sure I will be again. I’ve gone there for beauty and wonder and wanderings. But I’ve also lived and laughed and loved. It’s people as much as place that can call fond memories to mind. I feel lucky.

Do you have a place you visit by which you can measure the changes in your life? What makes you take stock? If you’ve not already, I hope everyone finds their Mt Cook.