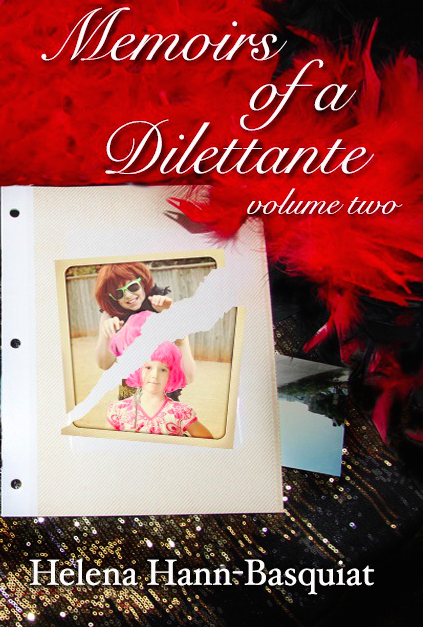 A special guest here today my friends, with a special post. I daresay you’ve heard whispers of mysterious author extraordinaire Helena Hann-Basquiat here before. That’s because she’s a writer worth the knowing – but I’ll let her quirky words speak for themselves. Her Pubslush campaign has 13 days to go, and here we have a privileged sneak peek into the second volume of Memoirs of A Dilettante for your previewing pleasure…

There is a place, a dark place, just outside of the GTA (that’s the Greater Toronto Area, if you’re interested, darlings) where darkness dwells. A place where the smog hangs over Lake Ontario like a malignant force – for the Dwarves that lived there burned the fires of steel refining day and night, pumping their smoke into the sky, leaving a desolation usually reserved for such detestable places as Pittsburgh or (shudder) Cleveland. In the long dead language of the people who once dwelt there, it is called Khazad-dûm, but people today refer to it as Hamilton, and its name is spoken in hushed, fearful tones. Children are warned never to venture north of King Street in the dark, and in particular to avoid the dreaded Barton Street, where all manner of twisted creatures dwell, seeking to prey on any weak straggler who might venture into their path. It is a place of horror, where…

“What?” I asked, standing firmly by my assessment.

“Well, iss not very noice, issit?” the Countess Penelope of Arcadia accused. You remember Penny, darlings. Tends to talk like a Dickensian street urchin from time to time, fancies herself something of a fashion trendsetter because of a incomparable collection of stripey socks, and is not, by any stretch of the imagination, a fan of the writing of one Mr. J.R.R. Tolkien.

“No, Penny, Hamilton isn’t very nice,” I agreed, knowing full well that’s not what she meant.

A couple of months ago, Penny and I had moved into her grandmother’s house in Hamilton in order to help look after her, and it had been an adjustment for everyone.

“Besides,” the Countess of Arcadia continued, “I fought you loiked West-day-oh.”

“Westdale? Oh yes. Three coffee shops, a bakery, a shitty pub, a Pita Pit and a TCBY. What’s not to love?” I held my hand over my heart, all a-flutter.

“Hmm,” the Countess of Arcadia said, tapping a finger to her lips and looking pensive. “Interesting. How very interesting.”

I wasn’t going to bite. I had an inkling as to where this was going, having just sat through Star Trek: Into Darkness, Tinker Tailor Soldier Spy, and two seasons of the BBC’s Sherlock on the weekend. Neither of us were feeling well, and so we loaded up on junk food and bundled our bacteria-besieged bodies in blankets and binged on Bandersnatch. Cummerbund Bandersnatch, that is, and if you want some back story on that silly sounding bit of schizophasia, it’s simple, darlings. One night, after one too many vodka and cranberries, the Countess declared her undying love for the star of Sherlock, one Benedict Cumberbatch, only in her drunkified state (drunkified is a good, fine, strong word, thank you very much, and seeing as it’s referring to a state in which one slurs one’s speech and engages in such dreadful activities as neologism, I’m standing by my use of it) she insisted (quite insistently, if I recall correctly, and I always do, darlings) that his name was Cummerbund Bandersnatch. It took, and that will forever be how we refer to the man in Casa de Hann-Basquiat.

“Fascinating,” the Countess continued, caressing her mouth as if deep in deductive thought.

“You seriously just swore for the sake of alliteration, didn’t you?” the Countess queried capriciously.

“You’re one to talk with your capricious queries,” I quipped.

“You need help,” the Countess Penelope of Arcadia accused, not unkindly.

“Yes, I thought we determined that,” I grinned. “Now go on, then. What do you find fascinating?”

“Ah yes,” the Countess of Arcadia (which is somewhere in the vicinity of 221B Baker Street, it would seem) resumed. “I find it fascinating that you claim to know so much about the village of Westdale, and claim to find it disagreeable and pedantic, and yet the true story of how you feel about it can be found in what you deliberately neglected to mention.”

I was driving Penny to the train station. One of the adjustments that we both had to make when we moved to Hamilton was a longer commute, and while neither of us enjoyed that very much, we tried to make the best of it.

“I’m sure I don’t know what you’re talking about,” I deflected, and then tried a different tact. “So are you going to go see the Desolation of Smaug this weekend?”

“Well, iss all in the bloody title, ennit?” the Dickensian street urchin that contrarily fancies herself a Countess replied. “You’re sayin’ it to rhyme with fog, but it don’t go loik that, does it? And Smaug don’t live in the Misty Mountains, neither. ‘E lives in the Lonely Mountain. And don’t fink I ‘aven’t noticed that you’ve, loik, changed the bleeding subject, you devious dilettante!”

I snickered into my coffee, nearly spilling it and driving us off the road.

“I thought you hated Tolkien,” I reminded her.

“I do,” Penny admitted. “Horrible writing. Archaic, laughable plot devices and in terrible need of an editor – but that man’s voice…”

“Thass the one, ‘Elena, my love, my sweet,” she agreed with a lusty grin. “That beautiful man’s glorious voice melts my knickers, it does. And ‘e’s voicing the dragon Smaug, so…”

“Now,” the Countess resumed, composing herself. She may or may not have wiped a string of drool from her lips. “Back to the matter at hand. You deliberately neglected to mention the following bits of information concerning the village of Westdale, which you claim to find boring and uninteresting. One – Westdale has a charming little theatre, which I happen to know that you love, because you have chosen to see not one but three films there lately as opposed to seeing them at the giant cineplexes. Two – Westdale has not one but two comic book stores, and I can’t help but notice that you are not behind in reading Saga or Unwritten – so tell me, Helena – where have you been buying your comics, huh?”

“Well, I…” I began, but was immediately interrupted.

“Three!” The Countess continued presenting her damning evidence against me. “Adjacent to one of these comic book stores is a wonderful little used book store that has the TARDIS-like quality of being much larger on the inside than it appears from the outside. Why, you could get lost in there for days perusing all those wonderful books.”

“Okay, okay, so what’s your point?” I asked, and she ignored me.

“Four!” Penny persisted. “You love one of those coffee shops you so surreptitiously dismissed. Any time we’re even in the vicinity, you’re all Hey, Penny, you wanna go to My Dog Joe? I submit that you are over-compensating, my dear. I have used my highly tuned powers of deduction to see through your ruse!”

“Have you, now?” I replied, amused at her amusement.

“Yes. Quite.” The Countess Penelope of Arcadia counted, affecting a posher, more Windsor Castle-like accent. “And we are not amused.”

Penny smiled at me. “Well, perhaps we are a touch amused. That does not mean I won’t call for your head if you do not agree to accompany me to the film this weekend!”

“But of course,” the Countess Arcade stated regally. “Who will protect me from the rabid Tolkienites?”

I sighed, “You’re going to wear your FUCK TOLKIEN t-shirt, aren’t you?”

“Well, yes, but only because my TOLKIEN WAS A LAZY, UNIMAGINATIVE PRAT shirt got destroyed during that melee at the Role Playing Gamer’s convention, and I thought you promised you’d never bring that up again, thank you very much for re-opening those old wounds.”

“Apology accepted, Captain Needa,”[1] the Countess replied in her best Darth Vader (which wasn’t very good, and to be honest, still had a trace of the cockney street urchin in it, if you can imagine that). “But just for that, you’re paying for the tickets.”

“And ice cream after the show,” the Countess demanded.

“We’ll see,” I said, as if she were four and not twenty-something.

“And then can we go mini-golfing?” Penny asked, deliberately upping the ante. “Or on pony rides?”

“You just keep pushing it, young lady,” I said in mock parental tones, “and we’ll be spending the weekend giving sponge baths at the old folk’s home.”

The Countess threw me a pathetic looking pout, and we both broke out laughing.

All things considered, it was good to be young and insane.

[1] To complete the trifecta, a Star Wars reference. After Darth Vader kills Captain Needa, he then accepts the man’s apology. You didn’t see that kind of badassery in those horrible prequels.

If you want to read more, BECOME A FAN at PUBSLUSH and pre-order Memoirs of a Dilettante Volume Two and Penelope, Countess of Arcadia

The enigmatic Helena Hann-Basquiat dabbles in whatever she can get her hands into just to say that she has.

Some people attribute the invention of the Ampersand to her, but she has never made that claim herself.

Last year, she published Memoirs of a Dilettante Volume One, and is about to release Volume Two, along with a Shakespearean style tragi-comedy, entitled Penelope, Countess of Arcadia.

Helena writes strange, dark fiction under the name Jessica B. Bell. VISCERA, a collection of strange tales, will be published by Sirens Call Publications later this year. Find more of her writing at http://www.helenahb.com or and http://www.whoisjessica.com Connect with her via Twitter @HHBasquiat , and keep up with her ever growing body of work at GOODREADS, or visit her AMAZON PAGE

3 thoughts on “Cummerbund Bandersnatch and the Desolation of Smog”