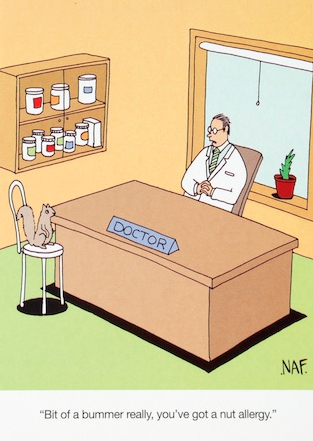 Nuts. Enjoy them while you can, everyone. Because when I take over the world…

I was going to leave that sentence hanging but actually I won’t – when I take over the world… that’s it. It’s over. They’re gone. Banned. Big Brother has nothing on me. Never mind your basic human rights and freedoms. No more nuts.

I’m sitting here with a fat lip, courtesy of my partner in crime. Normally I would be charmed by an affectionate peck on the lips (thank goodness that’s all it was) – but not today.

I completely understand why it’s difficult to remember to take a nut allergy seriously – and I’m the nut allergic one.

I’d always shuffle around the subject when someone was cooking for me; feel self-conscious bringing it up in a restaurant; fail to complain to housemates when finding peanut butter in the jam.

A few near-death experiences have just about cured me of all that. And it’s not the only aspect of life in which I’ve learned not only to take myself more seriously, but have found the self-permission to ask other people to take me seriously. Some things – they might be as small as a nut or as big as a dream – some things are a matter life and death.

Sometimes, when life gives you lemons, you can’t make lemonade. Sometimes they’re so damn sour there’s no amount of sugar in the world that can make them right. Throw out the lemons. As Kristen Lamb tells us, so well as usual, in this post – it’s ok to quit! In fact, sometimes, you have to.

If the book bombs – that’s ok. I’ll already have written the next one. I will have learnt from the last, so the next will be better. And the one after that. If there’s peanut butter in the jam – no amount of scooping it out will make the jam good again. You’re just mixing it up in there. You’re wasting time risking your life trying to fix something when you should give it up. Move on to the next, new pot of jam. (And tell your housemates to keep their £$*&@ peanut butter out your jam).

Don’t let nuts get you down! Carry a metaphorical EpiPen in your mind so there’s always adrenaline on hand to save you from anaphylaxis (I have been the boy in the picture. My throat has closed up and I’ve nearly suffocated to death. Following my dreams is now a necessity – must become rich and famous before the nuts have a chance to end me altogether – they’re sneaky and they’re out to get me, they must know I plot their ultimate doom).