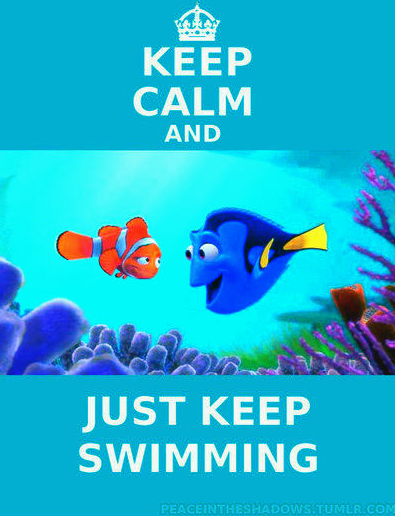 Sigh. Is anyone else prone to January Blues? The run up to Christmas is a blur, the holidays are a blast.. And then it’s back to the grindstone, with a lot of work to catch up on now all the fun’s been had, an empty bank account, and all these resolutions, which don’t seem so shiny when it’s time to actually sit down and *do* them. To make things worse, NZ has decided to make like UK and rain on my 2014. Note to NZ: It’s meant to be *summer* here right now, not monsoon season.
–
The list of things I haven’t so far achieved could go over more than one blog post. I’ll stick to something good that’s happened – I swam today. It may not seem like a big deal but, having put a fat cross against last year’s ‘fitness’ resolution (don’t even tell me how very un-measurable / un-quantifiable / un-specific / un-viable-when-still-eating-copious-amounts-of-fried-chicken that resolution was) – I decided that this year I would swim once a week and ride Enid into town (an epic proposition, trust me) at least 3 times a week. And that last can be either in the direction of house to town or swimming pool to town, so I can kill new year’s birds with stones. I have also resolved to eat no fast food this year^ (I wish you could change the size of font on this thing so I could have written that *really* small). [^definition of ‘fast food’ includes McD and KFC, does not include pizza and Chinese/Thai/Indian takeaway. Or fish and chips.]. I once swore off fry-ups for a while and that actually worked, so I have high hopes.
–
So my to-do list is long and getting longer, and I did not want to get up this morning to be the ‘new me’ that swims and cycles constantly. But having got home from road-trippage and epically failed to clean the house, write my blog, start to fix my novel, or, hell, even unpack the car – at least I *did* get up today and do one thing I wanted to do – I swam before cycling to the ‘day’ job. If I just keep swimming, January will be over before I know it and I’ll have put in place some good habits and done more things on the list. I admit I did do one other thing on the list and take down the Christmas decorations, but that was sad.

–
If you’re finding it hard to do anything – do something. You’ll feel better. If you do something good several times a week, you’ll feel fantastic. And once the anti-countdown to the end of Jan is over, you’ll be in the swing of it. That’s the plan 😀
–
Who else is struggling with the brand new start to the brand new year? Is it just me that has heard it’s unlucky to have decorations up past the 6th? (Ooh inspiration strikes for blog post on superstition). I started another item on the resolutions today and visited a few new blogs, commenting where I cared. I want to find one new blog I care about for every day of the year and find time to follow it. The world is full of blogs and there are stories all around us, just waiting to be discovered – but that’s another post for another day…
12 Replies

12 thoughts on “Just Keep Swimming & Other Solutions To January Blues”